Why we need Rainy day Monitors

It’s important to have rainy day monitors because some year 8s who have not been chosen as a prefect or a house captain can be a great role model and show that they’re capable of leading the younger ones. It’s also important to have a rainy day monitor so that there is someone who is monitoring the classes when it is raining and some who is supervising the children while it is raining.

We need rainy day monitors because if the teachers were on break and no one is monitoring the childrens in their  classes, the children won’t have anyone to listen to, so they will create chaos in the classrooms. For example if a class was left alone with no adults, teachers or any supervision, the children would go wild, running around the classrooms, going on their chromebooks and playing games and messing up the class.

My task for this week, is writing a Persuasive writing.

Here is my plan! 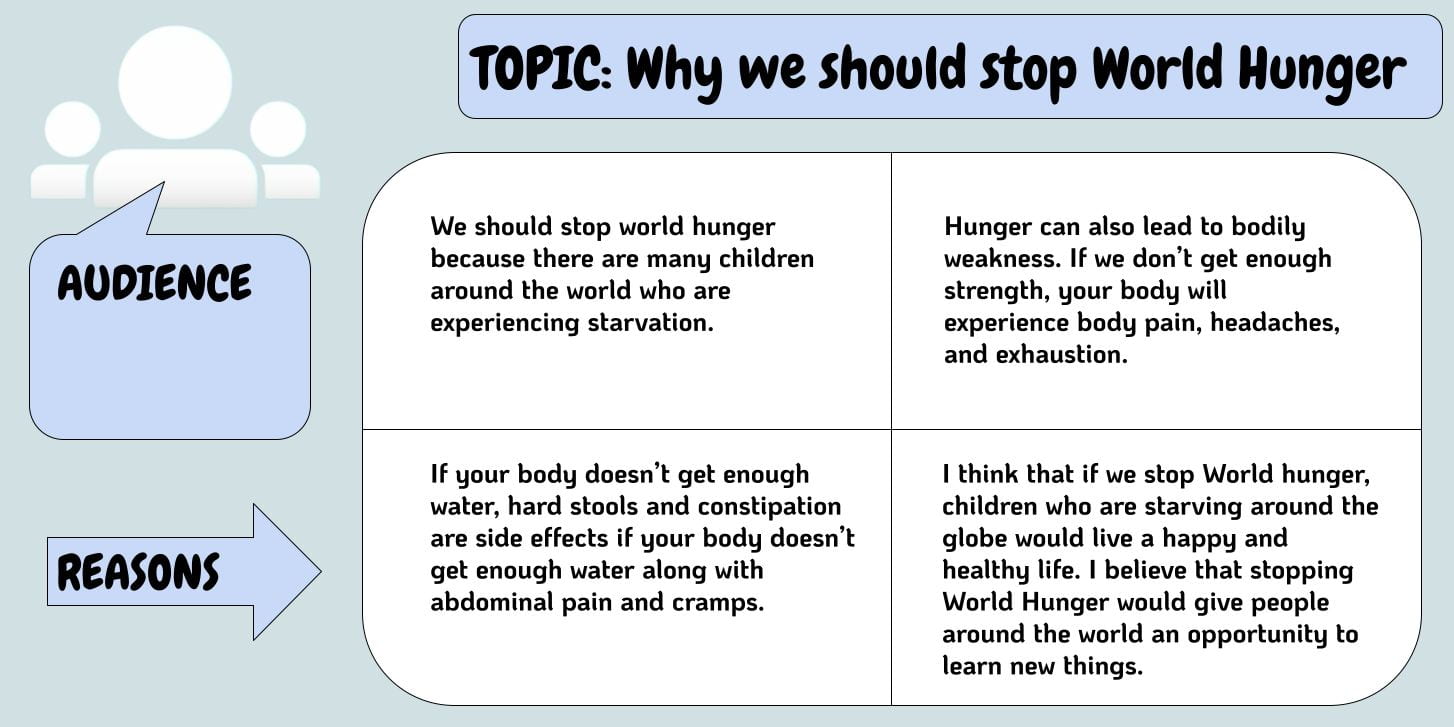 Dogs make better pets than Cats because they are much more trainable. They are usually trained to use the bathroom outside but they can play with you, they can do tricks, and can do much more with you. They could also protect you from robbers and intruders. They also promote a more active lifestyle for you.

Dogs and Cats are usually kept as pets more than the other animals/pets. Although they might sound nice, there are some consequences with having a pet. Like when the cat scratches your couch, poops on your new rug, pushes your new coffee mug, and more. There are also consequences with a dog as well, like when the dog poops inside, messes your room, bites you and more consequences.

So my conclusion is that dogs make better pets because whenever there is an intruder, then your dog could attack or scare the intruder away. Also because in many people’s opinion dogs make better pets. Having a dog also helps increase your fitness levels and increases your happiness.

Team 5’s play of Beauty and the Beast

This morning, we walked to the hall for the School Assembly. The Team 5 students (including me) sat on the dark red chairs behind everyone in the Hall. When the Assembly started, I soon noticed that the Korero for this Term was Art works.

When it was Team 5’s turn, they set up the stage for their play which was Beauty and the Beast. It was a romantic play between Mr Wiseman and Mr Moran. The song that they played was Beauty and Tale as old as time.

Jazmine and the Magical Bracelet..

Once upon a time, far away, there lived a lovely, creative and imaginative teenage girl.  Jazmine was reading a book on her hammock when she noticed her imaginary friend Trixy was pointing at the beach.  Jazmine stared at the beach with confusion in her eyes but finally considered that the beach may be a great place to take a break.

When Jazmine got out of the hammock, she took her cat Mr. Whiskers with her and walked to the beach with a delightful smile. When they got there, a sparkly object caught Jazmine’s eye. When she got closer, she noticed that the shiny item was a diamond bracelet. Once she picked it up, she looked around to see if anyone had come back for it or if anyone had passed. But no one was at the beach but her, Mr. Whiskers, and Trixy. After she looked around, she put on the bracelet not knowing that they would be in a whole different dimension.

Once Jazmine had put on the bracelet, Jazmine and Mr. Whiskers started floating in the air with sand circling them like a hurricane. Soon after that, They got transported into another dimension! When they got there, Jazmine was surprised when she saw all the amazing things! Like electrical tech, markets, and everything you could think of! The dimension they were currently in right now was called Imagination Land.

Jazmine was surprised that nothing happened to them. Until guards came up to them and handcuffed them! Once they were taken into the Galactical Palace, they noticed that the Queen was TRIXY! Jazmine soon noticed that the beach and the bracelet were all a trap! “Why would you do this!” Jazmine shouted. Trixy just left her speechless and locked them in a dungeon. Hours, days, and weeks have passed. Jazmine wondered if a hero would come and save them but it seems hope has lost.

Soon after Jazmine was about to give up, there was a large crash! Jazmine got up as fast as possible! The one who created the crash was a witch! The witch called out to Jazmine but Jazmine was too scared to reply. When the witch arrived at Jazmine’s dungeon she cast a levitation spell on the bars and moved them.

The witch then took Jazmine’s hand and sat on the broom. Jazmine took Mr. Whiskers right before the Witch flew away. The witch introduced herself. Jazmine soon found out that the Witch’s name was Lynette. They soon arrived at Lynette’s witch cavern. When they arrived there, Lynette created a portal that leads to Jazmine’s house. Jazmine then hugged Lynette and went inside the portal waving goodbye. When she went inside her house she dashed into the living room hugging her family with tears covering her eyes.

Welcome to your brand new blog at Edublogs!

To get started, simply visit your blog’s dashboard, edit or delete this post and check out all the other options available to you.

We can walk you through step-by-step in our guide to getting started with your blog.